STUDENTS LEARN MORE QUICKLY WHEN THEY CAN VISUALIZE A CONCEPT… 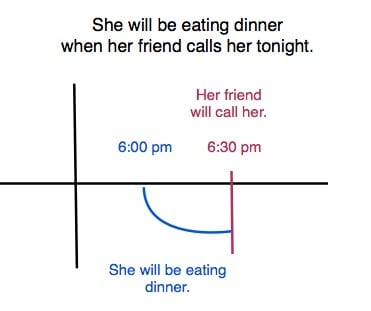 But what about the future progressive (also known as the future continuous)? This structure is not commonly used in English, so students don’t come across it very often. However, higher-level textbooks deal with this form, as do tests like the TOEIC. It is also used occasionally in English writing and speaking, so high-intermediate and advanced students need to learn it at some point. Although it is rarely used and thus harder to grasp, presenting the future progressive using the method outlined below will make it easier for your students. Section 6, Tricks, could be especially helpful!

The future progressive is formed by taking the modal will, the base form of the verb BE, and an action verb + -ING. Luckily, students don’t have to worry about subject-verb agreement: BE doesn’t change forms after a modal.

The function of the future progressive is to show a continuing (long) action getting interrupted by a short future action. Using the words long and short helps students understand this use better. The reason the future progressive isn’t used that often is because it’s a little strange to try to predict what will happen exactly at a given moment in the future. Unlike the past, where we know what happened already, we don’t usually know for certain what will happen in the future.

The time marker when is common for this case.

B. Always include some examples with a third person singular subject so that students realize that the regular simple present subject-verb agreement rules must be followed for the verb in the dependent clause. (I.e., the third person singular pronouns he/she/it, singular count nouns, and non-count nouns all take -s on the end of the verb.)

C. It’s also possible to use the future progressive when a clock time is mentioned instead of a dependent clause.