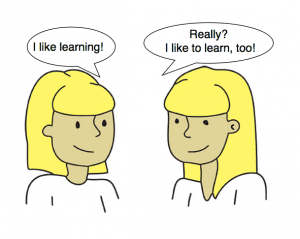 Gerunds (the -ing form of a verb) and infinitives (to + the base form of a verb) are strange little creatures. They combine the action meaning of the verb with the grammatical function of a noun. They are useful because they allow us to use verbs as subjects and objects. But in the object position, the choice of gerund or infinitive can seem quite arbitrary. Also, because they have so many positions in a sentence, they can be confusing for students to learn. Fear not! There are some sentence patterns that ensure the correct choice of a gerund or an infinitive.

This position commonly calls for a gerund. While an infinitive is also possible, it is very formal and not common.

Here is another common gerund position. This rule applies to all prepositions, including ones that are part of phrasal verbs.

This is the one position where both gerunds and infinitives are commonly used. The choice of which to use all depends on the verb. Some common ones are: advise, avoid, enjoy, finish, practise, quit, and suggest.

*Don’t forget that some verbs take either a gerund or an infinitive with no change in meaning. While students don’t have to worry about these verbs, they should still be pointed out. Some common verbs are: like, love, and hate.

Though it is possible in some cases to use a gerund after an adjective, it is more common to use an infinitive, making it the better choice for students.

If the verb has an object that is a noun or a pronoun, it is almost always followed by an infinitive. This makes it easy for students to choose the correct form.

This is the one position where both gerunds and infinitives are commonly used. It all depends on the verb. Some common ones are: ask, choose, decide, get, need, plan, promise, and want.

*ESL-Library’s new and improved gerund and infinitive lessons are coming soon. In those lessons, we put verbs into categories to help students figure out whether to use a gerund or an infinitive. Also, googling “gerunds and infinitives verb list” brings up several lists that students can use for reference.

Because both gerunds and infinitives retain their verb meanings (even though they function as nouns), they too can have objects. That means it’s not uncommon to see a sentence with two or more objects when gerunds or infinitives are in play. For example: