IF I WERE YOU… 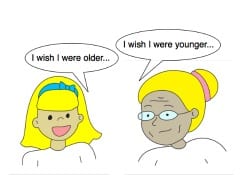 English doesn’t just have verb tenses, it also has voices and moods. One of the moods that students struggle with most is the subjunctive. The subjunctive is used only in specific cases that students aren’t often exposed to until they reach a high-intermediate or advanced level. But presenting the subjunctive earlier on isn’t a bad idea—when it’s laid out in certain patterns (see below), it becomes easier to understand and remember. Also, this form is often included in certain tests such as the TOEIC, and students of all levels take these tests. Most students wish the subjunctive were easier to learn—make their wish a reality!

In English, the subjunctive is a grammatical mood that is used to express an unreal situation such as a wish, possibility, or action that may or may not happen. The most common occurrences of the subjunctive that students are likely to encounter include sentences reporting suggestions, the second conditional, and sentences with “wish”.

A. The subjunctive form is used for reporting suggestions. Certain verbs (that I like to call verbs of suggestion to help students easily pick them out) in the independent (main) clause will result in the base form of the verb in the dependent “that” clause. Point out this pattern to students:

Verb of suggestion + that + base verb

Some of the more common verbs of suggestion that follow this pattern include: advise, ask, demand, insist, prefer, propose, recommend, request, suggest, and urge.

B. The subjunctive form is also used for giving strong suggestions or commands. Certain adjectives (that I call adjectives of importance to help students remember) in the independent clause will result in the base form of the verb in the dependent “that” clause. Point out this pattern to students:

Adjective of importance + that + base verb

Some common adjectives that follow this pattern include: important, necessary, imperative, essential, vital, and urgent.

Note 2: The subjunctive often occurs in clauses that begin with “that.” Point out to students that seeing “that” is a good indication that the subjunctive may be required (particularly on a test such as the TOEIC). However, “that” can be dropped in English, so it isn’t always a surefire way to spot the subjunctive. (E.g., I suggested that he study for at least two hours. / I suggested he study for at least two hours.) It’s more important to notice the verb or adjective in the main clause. Is the meaning of the verb “suggestion”? Is the meaning of the adjective “importance”? If so, the subjunctive should be used.

It is used to show an unlikely or impossible outcome that probably wouldn’t happen. The subjunctive mood becomes apparent when we use the beverb. This verb always takes the form of were, no matter what the subject is. It’s a holdover from long ago when we used certain forms to express mood far more often than we do nowadays. It’s important to point out this was/were case to your students because they won’t be expecting it! Give them a few examples (make sure the subject would normally take “was”). You could also print out the lyrics to “If I Were a Boy” by Beyonce and play it in class as a fun way to see the subjunctive in use.

For more tips on the conditional forms, check out my blog post: An Easy Way to Teach Conditionals. For an example of this form in use, look at the quote in the Grammar Review section of our Mini Debates lesson The Right to Die.

Another case where the subjunctive is used in English is with the verb wish. When wish is used in the independent clause, the be verb always takes the form were in the dependent clause when there is a present or future meaning. This confuses students for two reasons: 1) Why do we use a past verb when our meaning is present or future? 2) Why don’t we use was for the first and third persons singular? Again, we use were to indicate a hypothetical or unreal situation. It’s good to get them to memorize the pattern wish + were.

Note about wish and hope:

Wish indicates an impossible or unlikely situation (much like the second conditional); use were, a past verb, a past perfect verb, or would + verb.

Hope indicates a possible situation (much like the first conditional); use a present verb or will + verb.