I USED TO STUDY ENGLISH EVERY DAY, BUT IT STILL TOOK A WHILE TO GET USED TO ALL THE RULES. NOW I’M USED TO ENGLISH GRAMMAR!

Last time, I blogged about How to Teach “Used To” in 6 Easy Steps, and I mentioned that the expression used to can sometimes be confusing for students. Once you’ve taught them about used to, it’s a good idea to follow up with a lesson on get used to and be used to. Students might assume all three expressions with used to have similar forms and meanings, but this isn’t the case. Get used to and be used to are similar to each other in form and function, but they are both quite different from used to. Try presenting these expressions using the comparison chart below, and get your students to practice with the discussion questions at the end. 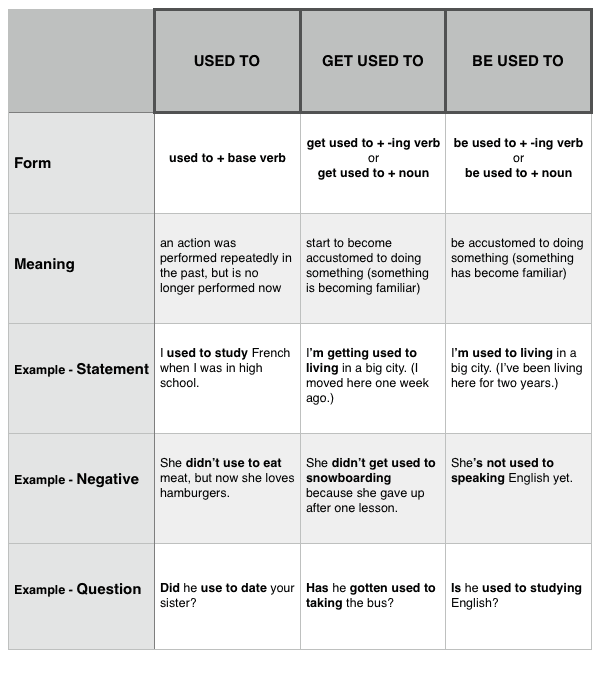 See How to Teach “Used To” in 6 Easy Steps for more details about the form, use, and tricky points.

Get used to is followed by a gerund (-ing verb) or a noun. In this expression, the used to part will never change to use to. Only get will change to reflect the verb tense.

Get used to indicates that something is becoming familiar. Use this expression for a new habit or routine. Though it is possible to use get used tofor both positive and negative experiences, it is more commonly used with negative situations (e.g., when something is difficult).

Be used to is followed by a gerund (-ing verb) or a noun. Note that the used to part will never change to use to. Only be will change to reflect the verb tense.

Be used to indicates that something has become familiar. Use this expression when something is now a habit or routine (and has been going on for a while). Like get used to, it is possible to use be used to for both positive and negative experiences, but it is used for negative situations slightly more often.